Life is full of adventure

A commission to design and fabricate a title logo for the exhibition.

In 2011 I founded my first architecture and art Lab in Fotan, I made it a place where both artists and architects could find interesting makings of their design. After three years, our Art Lab was pretty well known and received plenty of commissions. I invited one primary school classmate and one junior schoolmate to form a new company Laab. The new company drew even more commissions and grew immensely quick. Very soon we couldn't bear to sit more than nine staff at the midst of mdf dust (during fabrication) and decided to move to PMQ in 2014 April. By the way, Laab didnt interview into PMQ, it was my company recruited to them.

After three years of hard work, in June 2016, we expanded to 30 people and decided to move to a larger office in Quarry Bay as we had received larger architectural scale commissions. By end of July, the two partners voted to split the company and withdrew the new bigger commissions from a profit & portfolio sharing basis which I couldn't agree on. From that point onwards, it has never been that "laab" spirit in 2013 anymore.

I was upset, and felt betrayed by these guys after many years of hard work. I felt that I lost the company which I originated and "co"-founded.

Now I think, with the loss they made, I found the real potential in myself -

being the original Art-chitect. I lost Laab, but I found RAAW.

Check back soon
Once posts are published, you’ll see them here. 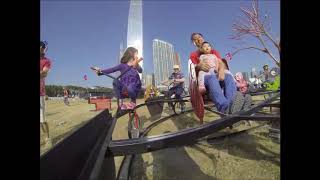 Ride the Roundabout and Look Around

Say goodbye to the daughter of your divorced wife. 同你前妻生既女講再見。